Self-proclaimed "I can read people's hearts, but I can't read the air!"
A transfer student girl. A beautiful girl who is friendly, affectionate, responsible and polite. The basic is always smile. The humor is easy, the weather is good, and there are quite a few things. However, he has excellent observing and reasoning powers, and is extremely effective in the battle against human enemies.
Nanao Nakajima  (CV: Hiro Shimono) A boy with a strong sense of justice. Longing for a hero. "I like school ability battle manga."
Although he has a passion and aspiration to fight against "human race's enemies", he lacks confidence in his ability and is a modest presence in the classroom. He kept hiding what his abilities were, so he was called incompetent by his classmates and made fun of him. However, the encounter with a transfer student girl, Nana Hiiragi, causes him to experience an unexpected change in destiny.
Kyouya Onodera (CV: Yuichi Nakamura) 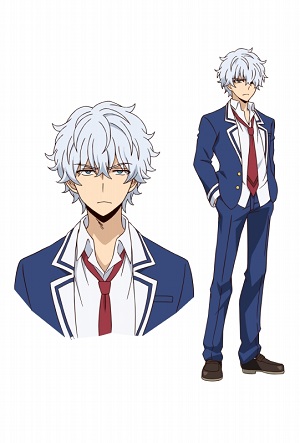 A talented boy who has transferred to the same day as Nana Hiiragi. Unfriendly and shy. A cautious personality who does not easily reveal his own abilities. A mysterious existence.
He has an observational power and reasoning power comparable to that of Nana, and is a very knowledgeable book reader. While participating in the investigation of various incidents that frequently occur at the school, Nana becomes a collaborator and at the same time a rival-like relationship. I like idol songs. Looking for friends.
Story Synopsis:
It is the year 20XX. Earth was assaulted by monsters that would come to be known as "the Enemy of Humanity." In order to deal with this threat, special schools comprised of teenagers with extraordinary abilities were formed. These people, who came to be known as "the Talented," had abilities that could defy the rules of reality. Among these people with supernatural powers was an outlier, an individual who was sent to one of these schools despite having no innate special abilities whatsoever. This is the story of our protagonist, who attempts to defeat the Enemies of Humanity through the use of intelligence and manipulation alone.
Comments From the Story and Artist Authors:
Author(Story)
When I greeted you at the anime production conference, I was surprised at how many people were involved.
As far as I could see, the manga, which was only the editor and Dr. Furuya who was drawing, was actually connecting many people.
It was also a time to reaffirm the support of everyone involved in the serialization and publication of books, and above all, the readers. I thank you all.
Please expect Nana, Kyouya and Nanao who are moving and talking.
Author(Art)
Thanks to everyone's help, we have had this opportunity.
I feel that many people touched Nana and were involved in it, and I am grateful.
thank you very much! !
Thank you Nana who is incompetent even in anime!
Follow me on Twitter for more Popular Anime Previews and Synopsis.
Anime News TV
Liked the news?