The synopsis of the episode 8 "close/friend" of the THE GOD OF HIGH SCHOOL scheduled to be broadcast on August 24th (Monday), the preceding cut and synopsis has arrived.The anime covers till chapter 54 of the manhwa.

At Nationals Mori and his friends face the North Chungcheong regional champions. Mori uses Bongchim’s acupuncture techniques for strength, but accidentally paralyses himself and loses to Na Gidong, a brawler.

Drake brags to Q about killing Bongsa and his wife and baby. Q recovers and activates his Charyeok, the scythe wielding Joker playing card, Drake only survives because his Charyeok, Caterpillar, heals him.

Q almost kills Drake but is stopped by assassins Priest Saturn and Priest Axley Ivanovic. Commissioner O arrives to help Q. Mira faces fellow swordswoman Jang Jangmi, a Kendo practitioner whom she defeats, winning the match for their team. Outmatched by O and Q Saturn and Axley flee while Drake sets off an explosion, destroying the building and seemingly killing himself.

Mujin determines that a traitor must have told NOX Q’s home address. The severed arm of Jin Taejin is discovered, suggesting he was defeated and captured. Jegal Taek begins his match using his Charyeok, Megaladon, to bite and savage his opponents. Mira prevents Mori from interfering and risking disqualification again, so Daewi intervenes instead but cannot stop Taek claiming a sadistically violent victory. The team led by talented player Park IlPyo, who is said to be one of the "key" candidates for the competition, played against Gwim Gi's team. Gwim Gi activates his own God Power, Jack the Ripper. On the other hand, Ilpyo doesn't use his borrowing power and fights only with Taekkyeon, which is known as an old-fashioned martial art.

On the other hand, Mori's team broke into a match and hit Jegal Taek, so was suspended. Against the clogged Mira, an empty Mori somewhere above. Apparently Ilpyo's back seems familiar... 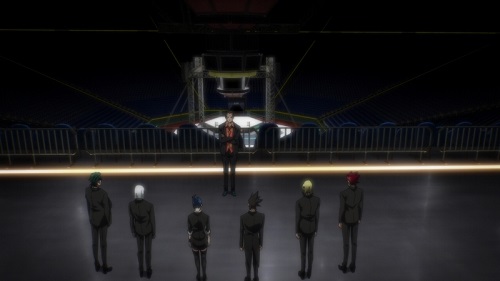