The key visual BEASTARS Season 2 TV anime based on Paru Itagaki has been released.

The visual that is unveiled this time depicts Legoshi and Louis, who are glaring at each other violently reflected in the fragments of the broken mirror, and the organizations Shishigumi that divide the back city, which is one of the highlights of the Season 2.

A dark night world view and a fierce battle scene that approach the essence of the murder case were expressed. In addition, Pina played by Yuki Kaji, Ibuki played by Taiten Kusunoki, and Free played by Subaru Kimura, will appear in the second season. The Season 2 will start broadcasting from January 2021. 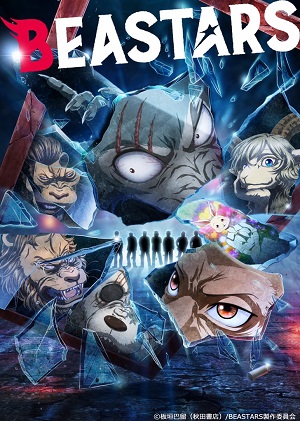 Beastars is a Japanese manga series. It has been serialized in Weekly Shōnen Champion since September 2016, with its chapters collected in 20 tankōbon volumes as of August 2020.

The story takes place in a world of modern, civilized, anthropomorphic animals with a cultural divide between carnivores and herbivores. The series takes its name from the in-universe rank of Beastar, an individual of great talent, service, and notoriety.

Beastars has won multiple awards, including being the first Akita Shoten title to take home the Manga Taishō Award. The manga is licensed for English release in North America by Viz Media, while the anime is licensed by Netflix.