How a Realist Hero Rebuilt the Kingdom Release Date

How a Realist Hero Rebuilt the Kingdom TV anime is scheduled to begin July 2021. The animation production is handled by J.C.STAFF. 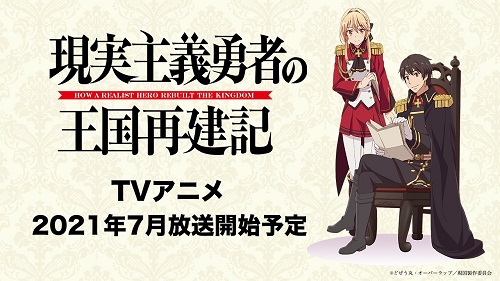 How a Realist Hero Rebuilt the Kingdom (Japanese: 現実主義勇者の王国再建記) is a Japanese light novel series written by Dojyomaru and illustrated by Fuyuyuki. The story follows Kazuya Sōma, a humanities-student-turned-hero as he pulls on his knowledge of realism and machiavellianism in order to rebuild the kingdom. A manga adaptation by Satoshi Ueda began serialization online in Overlap's Comic Gardo manga website in July 2017. Digital publisher J-Novel Club has licensed both the light novel and manga for an English release.