Sword Art Online: Progressive - Hoshinaki Yoru no Aria Anime film is scheduled to premiere in Japan in 2021. The production studio is A-1 Pictures. 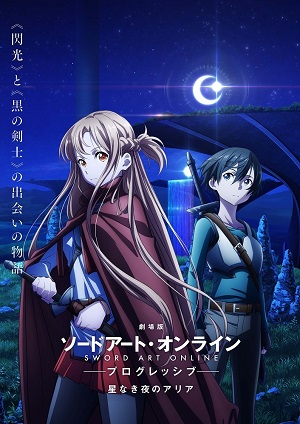 Sword Art Online (Japanese: ソードアート・オンライン) is a Japanese light novel series written by Reki Kawahara and illustrated by abec. The series takes place in the near future and focuses on protagonist Kazuto "Kirito" Kirigaya and Asuna Yuuki as they play through various virtual reality MMORPG worlds. Kawahara originally wrote the series as a web novel on his website from 2002 to 2008. The light novels began publication on ASCII Media Works' Dengeki Bunko imprint from April 10, 2009, with a spin-off series launching in October 2012. The series has spawned nine manga adaptations published by ASCII Media Works and Kadokawa. The novels and the manga adaptations have been licensed for release in North America by Yen Press.

Sword Art Online has received widespread commercial success, with the light novels having over 20 million copies sold worldwide. The light novel series had good reviews, mainly on later arcs, while other series like Progressive were praised since the beginning. The anime series has received mixed to positive reviews, with praise for its animation, musical score and exploration of the psychological aspects of virtual reality, but criticisms for its pacing and writing.