Shaman King is a Japanese manga series written and illustrated by Hiroyuki Takei. It follows the adventures of Yoh Asakura as he attempts to hone his shaman skills to become the Shaman King by winning the Shaman Fight. Takei chose shamanism as the main theme of the series because he wanted a topic that had never been attempted before in manga. The Shaman King manga was originally serialized in Weekly Shōnen Jump between June 1998 and August 2004. The individual chapters were collected and released in 32 tankōbon volumes by Shueisha. In 2017, Kodansha acquired the rights to the series and re-launched it on 35 e-book volumes in 2018, also published in print since 2020. 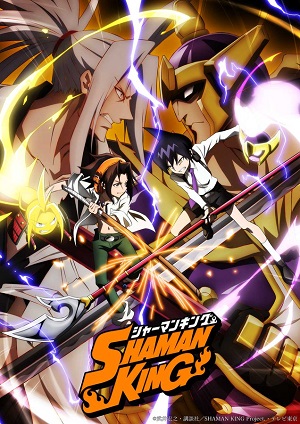 An anime television series was co-produced by TV Tokyo, NAS, and Xebec, and aired for 64 episodes on Japan's TV Tokyo network from July 2001 to September 2002. A reboot anime television series adaptation, produced by Bridge, will premiere on TV Tokyo in April 2021. The manga has also been reprinted in a kanzenban edition, and has spawned various spin-offs and sequel manga, video games, a trading card game, and many types of Shaman King-related merchandise.

In Japan, the manga has been popular, selling over 35 million volumes. Both the manga and anime have been featured, at various times, in "top ten" lists of their respective media. The Shaman King anime has been watched by many television viewers in Japan. Publications about manga, anime, and other media have commented on the Shaman King manga, with positive comments on the series.

A battle is about to begin in Tokyo: the Shaman Fight, a tournament held every five hundred years where shaman—those who can command spirits—confront each other in combat. The victor of this contest becomes the Shaman King and the only one who is able to contact and control the Great Spirit, allowing them to reshape the world as they please through its immense power.

During a late night walk, Manta Oyamada runs into his classmate, the carefree You Asakura, who invites him to come stargazing with some friends, who, to Manta's horror, turn out to be ghosts from a local cemetery! However, the knowledge that Manta possesses—a rare sixth sense that allows Manta to see these spirits—endears the boy to You. So when You finds out that his new comrade has been beaten up by a local gang, he decides to avenge him with the help of Amidamaru, a samurai ghost whose tomb was broken by the gang leader.

Soon Manta uncovers more about the world of spirits, including the Shaman Fight, in which his new friend You aims to claim victory.