Project Scard: Scar on the Praeter is an upcoming original Japanese anime television series produced by GoHands based on the Project Scard media project by Frontier Works.

The show is scheduled to premiere in January 9, 2021 on the Animeism programming block by studio GoHands.

The original TV anime Scar on the Praeter is listed with a total of 13 episodes across four Blu-ray and DVD volumes. 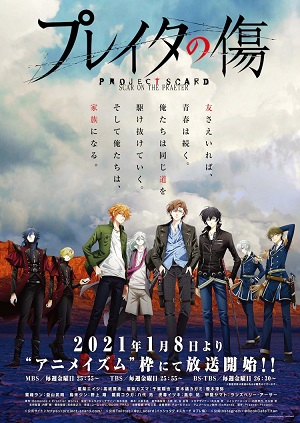 Project Scard depicts the encounters and battles of those who have tattoos which possess the sealed powers of divine beasts and gods. The story is set in the Akatsuki Special Zone, a lawless zone in Tokyo.

"Helios" are those who use the ability of the tattoos to protect the city, "Artemis" are committed to maintain security and control, whilst having a strong commercial motive, and the "Public Security Special Service" are Scard Staff of the metropolitan police department. They live through the turbulent days to keep on going.