World Witches Take Off! will premiere with 12 Episodes

Strike Witches is a media mix originally created by Fumikane Shimada via a series of magazine illustration columns. The franchise has since been adapted into several light novel, manga, and anime series and various video games. The series revolves around teenage girls who use machines attached to their legs to do aerial combat.

This is a humoristic take on the series, based on the manga by Makoto Fujibayashi. In this version of events, the enemy of humanity, the Neuroi, never came. Witches from all other the world spend their day not fighting.

The anime will have 12 episodes and the anime will be delivered by 2 Blu-ray volumes. Where each volumes will contain only 6 episodes. 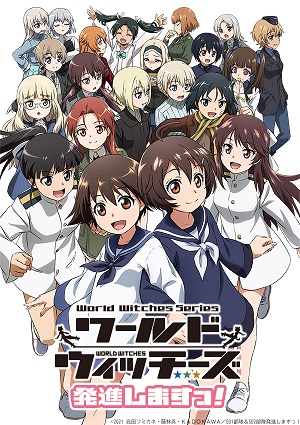 In the year 1939, humanity was on the verge of destruction. Equipped with weapons of devastating power, a mysterious alien race, known as the Neuroi, began an invasion of the Earth, ravaging the planet, obliterating countries, and vanquishing human armies. To counter this seemingly unstoppable force, the world's powers united. A new device was produced, called the Striker Unit, capable of facing Neuroi technology. Girls equipped with the Striker Unit became known as the Witches, forming humanity's last line of defense. They began their fight against the Neuroi, utilizing their now-enhanced magical abilities, flaunting destructive weapons no human could manage.

Fast forward to 1944—Yoshika Miyafuji is a young teenage girl who eventually decides to join the 501st Joint Fighter Wing, known as the "Strike Witches." With no formal training however, can Miyafuji learn to cooperate with her fellow Strike Witches? And if so, can she save humanity from the Neuroi onslaught?