Evangelion: 3.0+1.0 Thrice Upon a Time is an upcoming Japanese animated science fiction film written and chief directed by Hideaki Anno and produced by Studio Khara. It is the fourth and final film in the Rebuild of Evangelion tetralogy, based on the anime series Neon Genesis Evangelion. Originally expected for release in 2015, the film was indefinitely delayed due to Anno's involvement with the 2016 film Shin Godzilla. Production resumed after the production of Shin Godzilla ended in late 2016. The film is scheduled for release on January 23, 2021, after being delayed from a June 27, 2020 release date due to concerns over the COVID-19 pandemic.

The midnight premiere screenings of  Evangelion: 3.0+1.0 Thrice Upon a Time have been cancelled due to coronavirus and shortened business hours of some theaters in Japan. At the time of writing, no changes to regular screening have been announced. 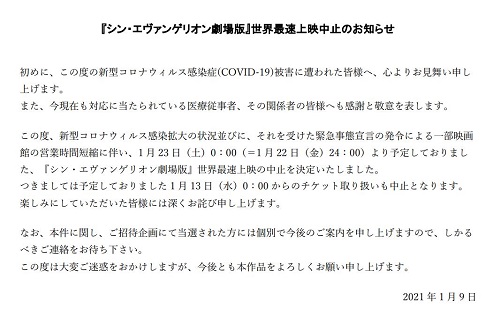