Soredemo Ayumu wa Yosetekuru is a Japanese manga series written and illustrated by Sōichirō Yamamoto. A webcomic version titled Shōgi no Yatsu was posted in 2018. The manga has been serialized in Kodansha's Weekly Shōnen Magazine since March 2019. An anime television series adaptation will premiere in 2022 further information awaited. An anime CM is also released. 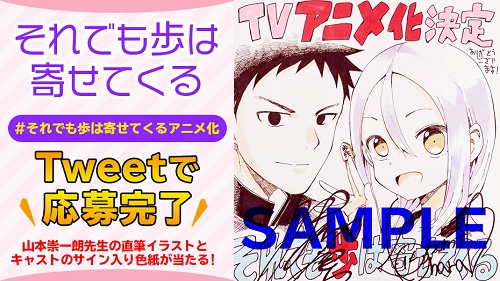 On a whim, first-year Ayumu Tanaka quits the Kendo Club to join the illegitimate Shogi Club. Urushi Yaotome, the president of the club and a master of shogi, is thrilled to finally have a playing partner. As Ayumu's upperclassman, Urushi endeavors to be his shogi mentor and student role model. Too often, however, she finds herself blushing with embarrassment! Stone-faced and honest, Ayumu sees no issue with calling Urushi "cute." Although Ayumu likes her, he refrains from confessing and promises himself to first beat her in a game of shogi.

Through school life and shogi games, the two students have many hilarious and heart-warming adventures. Ayumu enjoys every second with Urushi, but he is still a long way from beating her in shogi. With the commitment he made to himself, will Ayumu ever get the chance to confess his feelings to Urushi?