Mori Chack is the artist name of a Japanese graphic designer, from Japan. He is famous, especially for the character Gloomy Bear, a 2 m tall, violent, pink bear that eats humans.

Mori Chack believes that humans and animals are incompatible, and an animal is wild by nature. This is expressed most pronouncedly by the Gloomy Bear, which is often shown blood stained and attacking humans. Gloomy Bear is also available in different colors with slightly different designs. There is also a Space Invaders 30th anniversary gloomy bear.

Mori Chack's original character Gloomy Bear is getting a TV anime starting April 2021. The anime will be directed by Takehiro Kubota. 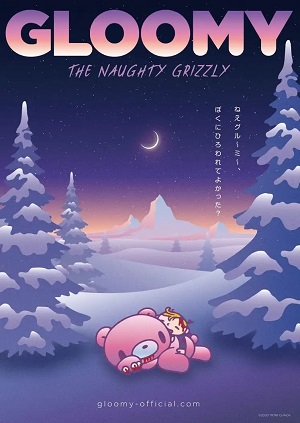 From the Cube Works press release:

Gloomy, an abandoned little bear, is rescued by Pitty (the little boy). At first, he is cute and cuddly, but becomes more wild as he grows up. Since bears do not become attached to people like dogs by nature, Gloomy attacks Pitty even though he is the owner. So Gloomy has blood on him from biting and/or scratching Pitty.